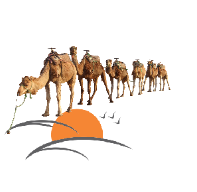 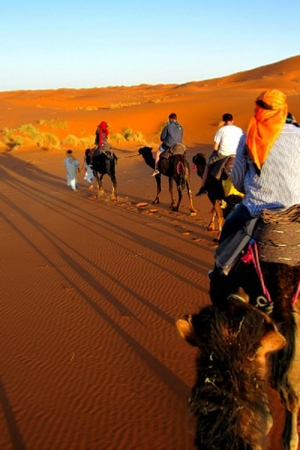 Pick up you from Airport To your Hotel in Casablanca with breakfast.

Departure at 8 Am of the morning and visiting Hassan II Mosque its traditional decoration detailing, including ceramic mosaic carved plasterwork and painted wood, the Hassan II mosque is often also heralded as a symbol the renaissance of Moroccan craft skills , inaugurated in 1993 , it is the second world biggest mosque and took five years of intensive labour by over 30.000 workers and craftsmen to complete ; the mosque is hug in terms of covered area it is the largest in Morocco. some 200 M high the mosque is built on a rock site and next of the ocean , Then Travel To Rabat via el Mohamadia , in the capital of Morocco we will visit Hassan Tower and Oudaya kasbah , Arrival to The bleu city around 6 p.m. overnight and accommodation in beautiful riad/hotel in Chefchaouen with breakfast.

After breakfast you will have time to explore The Bleu Medina by yourself then continue to Volubilis is by far the most impressive Roman site in Morocco and sits in a spectacular spot ; the hills and Moulay Idriss behind, vast views over the plain below . While much has been removed to adorn other cities over the centuries, or taken to museums such as the one in Rabat, the structure of the town is largely intact, break and lunch in Meknes is a striking town , a fact accentuated by the distant backdrop views of the Jbel Zerhoun, which rises to over 1000 M to the north . the wooded foothills and orchards of olives , apples and pears below provide a green setting to the city for much of the year. Of the great historic of Morocco, its vast imperial city is now nevertheless more historic architecture. another distinct part of Meknes is the medina which includes the intricately decorated Medersa Bou nania , vibrant souks , Dar jamai , in the Medina of Meknes has El Hedim Palace «the square of destruction « , opposite Bab Mansour , the best point for exploration . The biggest open square in the city , it was once as busy as the Jemaa el-Fnaa in Marrakech , with acrobats , storytellers and sank charmers playing their trade , from Meknes to our Destination will take around 40 min then overnight and Accommodation in Fes with breakfast.

After breakfast in your riad , you will start exploring the oldest city in Morocco, walking in its alleys and small streets, Fes city - perhaps as near to the middle age as you can. The city has numerous historic buildings , centered around the Qarouiyine Mosque and king palace then some Memorable souks , the Qarouiyine university founded 859 , one of the most prestigious centre of Morocco in the Arab world , the influence of university grew a few centuries later under the Marinades with the construction of colleges or Medersas . The two parts of Fes el Bali were united by the almorabids in the 11th century and Fes became one of the major cities of Islam; after lunch visit the wonderful panoramic view over the whole Fes Medina . Overnight in Fes with breakfast.

After breakfast our Private Casablanca Tour continues towards to Erg Chebbi Dunes and Merzouga via Ifran and Midelt You will be travelling through the fascinating Tiz Ntalghamt pass and the Ziz Gorge, taking in views of the High Atlas plateau, you’ll notice how the scenery changes to reveal hints of the Desert as you approach the city of Errachidia, here you will have lunch and enjoy the Berber hospitality. Afterwards, you will travel along the luxuriant Ziz Valley, stopping for panoramic views along the way to Erfoud the capital of the fossils. Arrive at Merzouga on the afternoon. You’ll be welcomed with a glass of mint tea before to take the Camel ride to your Desert accommodation, overnight in the Camp with dinner and breakfast

Get up early to contemplate the most spectacular sunrise , shower and breakfast in the Hotel , afterwards , Drive to Rissani it was once the Berber capital of the Tafilalet region , and a major trading centre. it was founded in 757 by the Arab leader Mousa Ben Nasser , and its location on the major shale to Europe trade route, from Niger To Tangier , gave it considerable importance and prosperity , trading in gold ,its fame grew as did its size. The ruins , littel of whish remain , are between the town and the river. A major new Kasbah was put by Moulay Ismail ,but Ait Atta tribe destroyed the town in 1818. lunch in Tinjdad travel through The « Road of the Thousand Kasbahs’ »as it is marketed , runs between Merzouga and Ouarzazate through arid plains Oasis with a backdrop of harsh mountain landscapes , where send-in nomadic Berber pasture their flocks. Dinner and Accommodation in Dades Valley.

After breakfast in Your Hotel in Dades , we will take a short walk in the gorges before departure for Marrakech. We will follow the Dades Valley through Kalaat M'Gouna is the capital of the Moroccan Rose-Essence industry and centre of the Mgouna Tribe ; « The name means ‘Citadel of the Mgouna ‘ and is also spelt Kalaat M'Gouna « .The former French administrative centre become a sprawling town with banks. The Rose Festival is held in late May /early June with Dance and processions under a shower of rose petals to celebrate the harvest. the Valley of the Roses and the road of a thousand Kasbahs. We visit of Ouarzazate and stop for lunch in Ait Benhaddou old village. We will have time to explore the famous protected UNESCO site which is the nest of many films like the Gladiator, Lawrence of Arabia and much more. We will drive via Tichka pass to arrive to the Riad in Marrakech with breakfast.

The Highlights of the city are less its museums and Historic sites than the streets and souks of its medina , and you should allow plenty of time for wandering. Stopping for min tea , and getting inevitably lost. Jemaa el-Fnaa makes a good place to start with a fresh organ juice in the square , is an easily - navigated introduction to the impressive palace museums of Dar sidi Said and Bahia Palace . the Saadain Tombs are also a must - do n but can get very crowded. Get some lunch around here befor heading north again to the Koutoubia Mosque - Non-Muslims are not allowed in but the koutoubia Gardin is a good sport for a post - prandial wander, and has good views of the minaret. hooping in the souks can be overwhelming ;then we will drive to the calming and colorful Majorelle Gardin for a wonder among the greenery and glimpses , lunch in the heart of the medina in late afternoon back to the hotel.

Today we will drop off you to Casablanca airport and the end of our service. 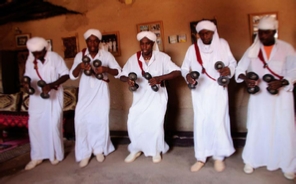 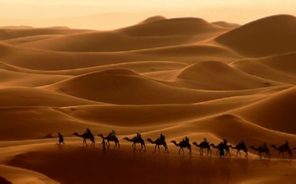 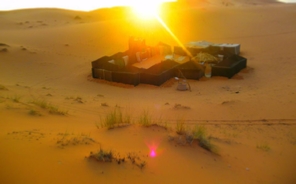 NOT INCLUDED IN 9 DAY MOROCCO CULTURE TOUR FROM CASABLANCA